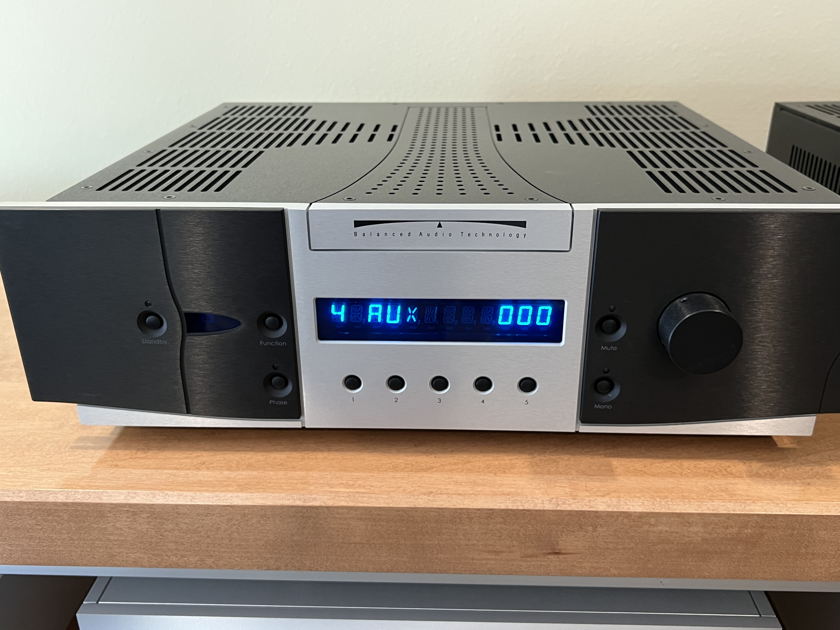 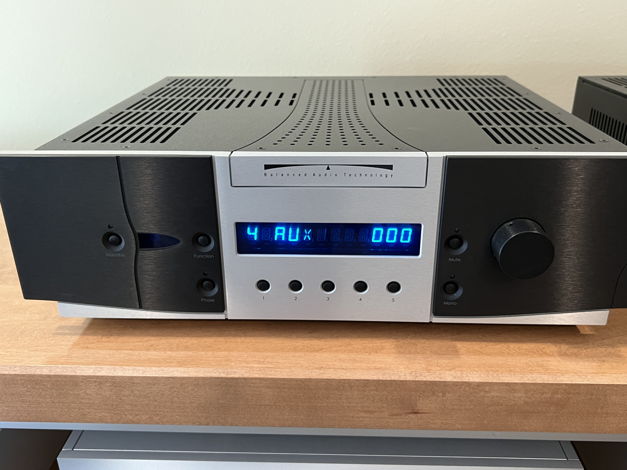 I will pay for Escrow fees

Selling USA 48 contiguous States only. Shipping costs are insane nowadays. For direct experience with the gears I  just sold, considering the massive weight of this amps the flat fee even if it seems high will not cover the actual cost.

THE REX II preamplifier is the culmination of nearly two decades of innovation in line-stage design, and represents the pinnacle of Balanced Audio Technology’s purist approach to building a statement control center that is without peer in the industry.

This change to a transformer-coupled output stage has a solid engineering foundation.  All devices have inherent imperfections.  Yet, while both capacitors and transformers can perform the same task of DC decoupling; in many cases the transformer can be designed closer to the ideal device model.  This benefit, however, does not come easily.  First – the design of a linear and close-to-ideal transformer is not trivial.  Second – some applications are more suitable for transformers than others.  And third – the highest quality transformers are also much higher in cost.  These three elements combined explain why good transformers are relatively uncommon in high-end audio.

Simplicity of design, especially in the direct signal path, has always been the hallmark of Balanced Audio Technology’s purist approach to circuit topology.  Some advocates of this purist approach like to talk about a “direct wire with gain” as being the ideal circuit.  The REX II preamplifier deftly meets this simple design criterion.  The signal in the REX II preamplifier is transmitted through only one gain stage.  This approach is free from the negative artifacts attributable to both extremes of modern preamplifier designs – passive preamplifiers on one end of the spectrum and multistage buffered active circuits on the other.

The benefit of the UnistageTM circuit is that it provides the ultimate simplicity of amplifying the incoming signal only once, while using no global feedback to double-back on the straight-through integrity of that signal.  Imagine telling a joke to your friends and telling them to “pass it on”….  Pass it on enough times and you won’t recognize the joke.  Pass the music through too many gain stages, and you’ll no longer recognize the genius and beauty of your favorite recordings.

Of course the REX II preamplifier is balanced.  Balanced Audio Technology staked its reputation on this principal of circuit design from day one.  Today, it isn’t hard to find many followers in the industry.  Why do we believe that balanced is better?  In our opinion balanced topology simply provides a complete signal representation.  Something magical happens when you free yourself from the limitations of the single-ended structure with its half-signal processing.  If a one-handed craftsman can be very good, imagine what he could do with two hands.

It is fairly common to associate the benefits of balanced design with improved signal integrity when dealing with long interconnects for example.  However, the true benefits of a balanced approach to circuit design go much further than signal transmission.  These benefits include such fundamental aspects of design as the interaction between the power supply and its associated gain stage.  It is now common wisdom that the power supply should be considered a part of the signal path.  However, whereas the sonic contribution of the power supply can be overwhelming in a single-ended design, it is much less of a concern in a balanced circuit.  As the circuit becomes more symmetrical, the residual effect of the power supply becomes less intrusive.  In effect, the demand on the power supply is reduced, making it easier to design a balanced circuit that conforms more closely to the engineering ideal.

In 1999, Balanced Audio Technology introduced the world to the 6H30 SuperTube with the release of the VK-50SE preamplifier.  Today, many of our major tube competitors have followed BAT’s lead by designing their own reference products based on this stellar vacuum tube.  While imitation is the sincerest form of flattery, there is only one REX II preamplifier.  The REX II preamplifier uses eight of the 6H30 SuperTubes in its Control Module to achieve an extraordinarily high-current, low impedance drive capability.  As we had written upon introduction, “comparing the 6H30 tube to a standard 6922 is like comparing a Formula 1 race car to a family sedan.”

Indeed, the REX II preamplifier would need thirty-two 6922 tubes to offer the same current delivery as its 6H30 SuperTube based implementation!  But Balanced Audio Technology doesn’t stop there in its flagship design.  Imagine the robust nature of a vacuum-tube power supply designed to support this level of instantaneous current delivery.

The REX II Power Module is a story in itself.  In order to support the signal-handling needs of the Control Module, the REX II Power Module contains ten vacuum tubes.   The tubes in the Power Module are supported by two, large toroidal transformers in a true dual-mono configuration.  Vacuum tube rectifiers and user-configurable current sources, as well as vacuum tube AC shunt regulators, provide the final level of refinement for this massive power supply.

The DC voltage undergoes several steps of filtering that include the use of sophisticated C-multipliers that minimize low-level noise in the power supply.  The final stage of filtering uses BAT’s newest SUPER-PAK of custom oil capacitors.  These same capacitors are also used in the Control Module’s SUPER-PAK.

Indeed, the REX II preamplifier takes the Balanced Audio Technology tradition of massive and non-conventional power supplies to a new level of performance altogether. For the REX II preamplifier, BAT designed each box to contain the complete power supply for one polarity – positive in the Control Module, negative in the Power Module.  And yes, the size of each individual dual-mono power supply is comparable to that found in many power amplifiers!

Finally, the user also has a switch-selectable choice between either the 6C45 or 6H30 SuperTube as the AC shunt regulator tube to be used within the REX II Power Module.

These choices allow the user to tailor the REX II preamplifier’s sound to meet their specific needs (e.g. providing a more romantic sound if so desired).

The REX II preamplifier employs a proprietary electronic shunt volume attenuator that offers one hundred and forty steps of 0.5dB resolution.  The series element used in this volume control is the Vishay bulk foil resistor – the most precise and low distortion resistor available.  Discrete metal film resistors are used to bleed the unused signal to ground.  These one hundred and forty steps give precise repeatable volume settings that sound continuous to the human ear.  With the REX II preamplifier, you can always get the volume just right!

The REX II preamplifier is easy to use right out of the box.  It is also just as easy to customize!  Name your sources.  For example, choose VKD5 for your CD player input or MOVI for home theater playback.  Fix your volume for the MOVI input alone to allow easy master control of your home theater system from your pre/pro remote.  Select a fixed balance adjustment for the phono input to accommodate an older phono cartridge.  Switch phase from your chair to see if a recording was made in reverse polarity.  If you only use one of the REX II preamplifier’s many extensive features, you may find it a godsend for making your audio setup perfectly tailored to fit your needs.

Now, with its pure transformer coupled output stage, the REX II preamplifier provides a level of transparency, dynamic scale, and textural insight that is simply beguiling.  The power, finesse, and beauty of music are conveyed effortlessly by BAT’s latest eighteen-tube statement design.  THE REX II preamplifier is Balanced Audio Technology’s finest preamplifier yet – from the company whose preamplifiers have always been renowned for their musicality, power and grace.

The signal in the REX II is transmitted through only one gain stage. The UnistageTM circuit provides the ultimate simplicity of amplifying the incoming signal only once, while using no global feedback. Eight 6H30 SuperTubes in the Control Module achieve an extraordinarily high-current, low-impedance drive capability. Indeed, REX II would need 32 6922 tubes to offer the same current delivery! But BAT doesn’t stop there. Imagine the robust nature of a vacuum-tube power supply designed to support this level of instantaneous current delivery, and you have a better idea of the REX II’s peerless excellence.

MORE THAN JUST A PREAMP WITH AN EXTERNAL POWER SUPPLY

Contrary to its external appearance, the REX II is not simply a preamplifier with an external power supply box. This conventional type of partition suffers from several well-known drawbacks, foremost being the high-impedance nature of the remote power supply. In the REX II, the control box offers the benefit of a low-impedance local power supply while also preserving an upgrade path for VK-53SE preamplifier owners. BAT designed each box to contain the complete power supply for one polarity. And yes, the size of each individual supply compares that found in many power amplifiers!

Easy to operate out of the box, REX II is just as easy to customize.  Name your sources.  Fix your volume for the MOVI input alone to allow easy master control of your home theater system from your pre/pro remote. Select a fixed balance adjustment for the phono input to accommodate an older phono cartridge. Possibilities are seemingly endless. Most importantly, REX II provides a level of transparency, dynamic scale, and textural insight that is simply beguiling. This 18-tube statement design lets you hear and feel the power, finesse, and beauty of music in ways you’ve never imagined.

No questions have been asked about this item.

Ask the seller a public question

Item can be returned within 3 days of receipt.

Items must be returned in their original condition, with all included packing materials and no signs of use. Buyer assumes responsibility for all shipping return costs unless the item was not received as described.

Buyer will receive a full refund in the original payment method less any shipping charges.

Items from this seller